A Transnational Panel on Sanctuary, Activism, and Immigration

Seven panelists will analyze the recent movement for sanctuary cities and campuses from the perspective of activists, academics, and artists from three regions of the world. 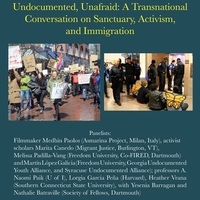 The panelists will analyze the recent movement for sanctuary cities and campuses from the perspective of the United States’ history of internment and incarceration, Vermont’s tradition of democratic townships, Europe’s current refugee crisis, and Latin America’s long tradition of autonomous national universities and highly mobilized students. Panelists include activists, academics, and artists from three regions of the world in a deliberate attempt to create much-needed dialogue between groups who often work in isolation. The panelists will explore how we might expand the concept of sanctuary to include historically criminalized and marginalized groups and their interactions with the police. Writing in The Nation, Kristina Kay Robinson noted about Paulos’ film Asmarina that, “watching the film as a black American, I related to their struggle with a national narrative that often excludes their contributions to the national culture, as well as their deep longing for a place either they had never been or to which they cannot return. The point of no return is a place few peoples know.” The panel will provoke dialogue about sanctuary, immigration, race and national belonging, and the politics and poetics of the “point of no return.”