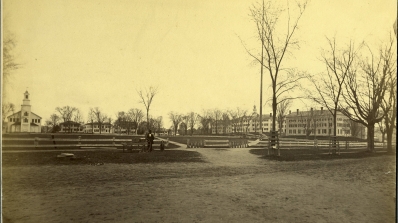 Notes from the Special Collections

Conference: George Ticknor ('1807) and his Legacy in the 21st Century

This conference is the first of two events that will celebrate the life and work of renowned Hispanist George Ticknor '1807, as well as his scholarly legacy. Events will begin Thursday, October 31st, 2019 in Haldeman Room 041 at 4:30pm.

* There will be two events: one in the Fall of 2019 and the other in Spring of 2020. The first one will be devoted to Ticknor as language teacher and educator and the second to his contributions to the study of Spanish literature, as well as his legacy.

George Ticknor's love for classical and modern languages started during his years at Dartmouth College in 1805-07. He completed his education with one of the most influential literary historians of the day, Friedrich Bouterwek at University of Göttingen in Germany (1814-1818). After travelling to France, Spain and Portugal, Ticknor returned to the US to become the first Professor of French and Spanish of the newly created Smith Professorship of Romance Languages and Literatures at Harvard College in 1819. From that position and during almost two decades, Ticknor greatly contributed to strengthening the study of modern languages and literatures and their inclusion in the Harvard curriculum, a consequential step that was followed by the most prominent institutions of higher education in the US during the 19th and early 20th centuries. Some of his works include his lecture on "The Best Methods of Teaching the Living Languages" (1832) and his monumental History of Spanish Literature, 3 vols. (1849). Ticknor's History, based on the German idealist notion of national literatures, had an enormous influence. Translated into Spanish and French, it was adopted in Europe and the United States as the main guide for the study of Spanish Literature. Ticknor was also a prominent figure in the cultural scene of his native Boston. Part of his impressive personal library was bequeathed to the newly created Boston Public Library in 1852, an institution he helped establish. Other important figures very much influenced by Ticknor were Henry Wadsworth Longfellow, who succeed him at the Smith Professorship, and historian William H. Prescott (a pioneer of modern historiographical research in the United States who published a seminal work on the reign of Ferdinand and Isabella of Spain, as well as groundbreaking books about the conquest of Mexico and Peru). The conference will also pay attention to the figures of other American scholars, book collectors and philanthropists whose activities helped promote and disseminate Hispanic letters, arts, and culture in the United States, in particular the founder of the Hispanic Society of America, Archer Milton Huntington.

A group of notable specialists in the field, plus a cohort of Dartmouth colleagues will participate in studying the contributions of Ticknor and his circle to the establishment of the study of modern languages and the consolidation of literary history and philology in American universities, dominant trends until a few decades ago. In addition to this central perspective, participants will also expand this debate to other areas less developed in Ticknor's time, like the literary production of Latin American countries as well as the contested notion of Hispanismo.

The conference schedule is listed below. For further information on this conference and the individual presentations, you may contact Prof. José M. del Pino at [email protected].

George Ticknor and the Teaching of the Modern Languages

2:15-2:45: Two hundred years of Ticknor's legacy: what language proficiency can tell us about pedagogy, Fernando Rubio (University of Utah)

2:45-3:15: Cognitive Linguistics and the Teaching of Living Languages: from 1832 to 2019, Reyes Llopis-García (Columbia University)

This event is sponsored by Dartmouth 250 Anniversary Initiative, Department of Spanish and Portuguese, the Leslie Center for the Humanities, and DCAL.