When a 6.3 magnitude earthquake rocked central Italy in April 2009, the University of L'Aquila was left in ruins. All but two of the buildings were deemed structurally unsound, including the library. “Without a library, we can’t work,” says Valentina Martemucci, a graduate student at the University of L’Aquila.

Now Martemucci is continuing her PhD dissertation research at Dartmouth thanks to the Dartmouth-L’Aquila Project. Sponsored by the Leslie Center for the Humanities, the Dickey Center for International Understanding, and the Office of the Provost, Martemucci and fellow graduate student Christian Orsini arrived on campus in January at the start of winter term. Orsini will spend just the winter term at Dartmouth, researching a dissertation on English romantic poet John Clare, while Martemucci is on campus for winter and spring term working on her dissertation about contemporary Italian literature. A third graduate student from L’Aquila spent the fall term at Dartmouth. 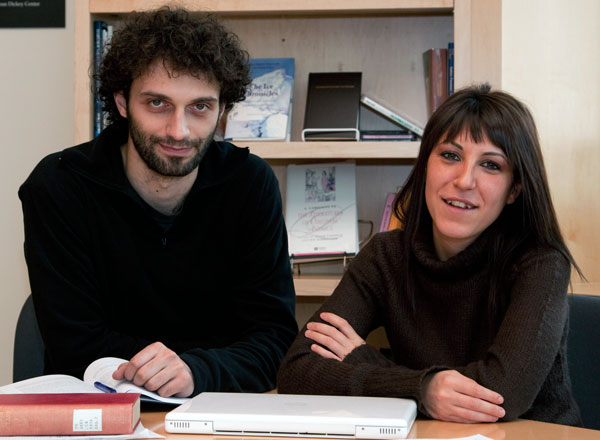 “Our library is completely destroyed and we can’t use the books any more,” says Orsini, who explains that while classes resumed last summer and have now moved from tents into buildings, that the library has not yet been restored. “So it was a great thing to make contact with the Dartmouth professors who had the idea of bringing us here for an exchange. We really appreciate that. And the library here is great. For me in the field of English language, most of the books are here. To find them in Italy would be too difficult.”

“Here we have everything we need, every kind of book. It’s better for us to study here,” says Martemucci, explaining that the strict Italian library system makes research difficult even under normal circumstances because patrons may check out only a limited number of books and stacks are closed to the public.

Orsini, a high school English teacher and a L’Aquila native, is advised at Dartmouth by English professor Andrew McCann, who specializes in nineteenth-century British literature. Martemucci, who spent the fall semester studying at the University of California, Santa Barbara, meets regularly with Dartmouth Italian professor Graziella Parati, whose research interests include Italian-American literature. Parati, along with English professor Monika Otter, helped organize the Dartmouth-L’Aquila Project and secured the funding.

“We had an Italian House advisor at Dartmouth a couple of years ago who was doing his PhD at L’Aquila and he told us he had to do his defense under a tent shortly after the earthquake,” Parati says. “He was very sensitive to their plight, and asked if we might be able to bring graduate students to Dartmouth to continue their research.” In addition to working on their dissertations at Dartmouth, Parati notes that Orsini and Martemucci conduct office hours for the College’s Italian literature students, participate in Italian Club activities, and are assisting two undergraduates majoring in Italian with their culminating experiences.

Adrian Randolph, director of the Leslie Center, says the center was happy to provide an office and serve as official host for the Italian students. “This seemed like the perfect opportunity to offer help where help was needed, and thus reaffirm the bonds that constitute the international scholarly community,” he says. “And it is a testament to the creative desire that fuels research that these young scholars, whose lives have been disrupted by natural catastrophe, should wish to continue their work. The Leslie Center is proud to play a small role in helping them achieve their goals.”

Dartmouth has a history of helping students whose studies have been interrupted by natural disasters. After New Orleans was devastated by Hurricane Katrina in 2005, the College accepted more than 20 temporary transfer students from New Orleans-area colleges, such as Tulane University. Dartmouth is currently in the organizational stage of bringing academically qualified students to campus from earthquake-ravaged Haiti, as President Jim Yong Kim announced last week.