James Robson (Harvard). "Filled With Meaning: Why Do the Contents of East Asian Statues Matter?" Free and open to all. Reception follows. 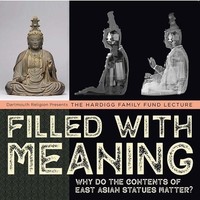 Abstract: Scholars have recently come to realize that religious statues throughout Asia have hidden cavities that are filled with various objects inserted during a consecration ritual.  This talk explores the hidden world of  these statues through a discussion of a large collection of statues from throughout East Asia (China, Korea, and Japan).  These statues provide a valuable glimpse of local religion, ritual practice, lay devotion, and lost sūtras. These statues also raise a host of significant interpretive questions for historians of religion, including issues such as icon animation, idolatry, and iconoclasm.  The images discussed in this talk contain a niche carved into their back (or the base) that is filled with a variety of objects, including relics, religious manuscripts and printed texts, medicinal herbs, desiccated insects, talismans with magical writing, and a “consecration certificate”  or “ vow text."  These statues are ubiquitous, but have had a particularly intriguing history of visibility and concealment in East Asia and in Western scholarship. This talk will raise questions about why sacred images and icons such as these have been objects of extreme devotion for some, but also presented problems for priests, politicians, missionaries, philosophers, and academics who for various reasons have found them distasteful, attacked their validity and power, and have tried to hide them away or destroy them. Why, even in the face of critique and destruction, have they persisted and proliferated into the present?

James Robson is the James C. Kralik and Yunli Lou Professor of East Asian Languages and Civilizations at Harvard University. He is the Director of Undergraduate Studies, East Asian Studies, and has served as Director of Graduate Studies for the Regional Studies East Asia M.A. program. He teaches East Asian religions, in particular Daoism, Chinese Buddhism, and Zen, as well as the sophomore tutorial for concentrators. Robson received his Ph.D. in Buddhist Studies from Stanford University in 2002, after spending many years doing research in China, Taiwan, and Japan. He specializes in the history of medieval Chinese Buddhism and Daoism and is particularly interested in issues of sacred geography, local religious history, talismans, and Chan/Zen Buddhism. He has been engaged in a long-term collaborative research project with the École Française d’Extrême-Orient studying local religious statuary from Hunan province. He is the author of Power of Place: The Religious Landscape of the Southern Sacred Peak [Nanyue 南嶽] in Medieval China (Harvard, 2009), which was awarded the Stanislas Julien Prize for 2010 by the French Academy of Inscriptions and Belles-Lettres and the 2010 Toshihide Numata Book Prize in Buddhism. Robson is also the author of "Signs of Power: Talismanic Writings in Chinese Buddhism" (History of Religions 48:2), "Faith in Museums: On the Confluence of Museums and Religious Sites in Asia" (PMLA, 2010), and "A Tang Dynasty Chan Mummy [roushen] and a Modern Case of Furta Sacra? Investigating the Contested Bones of Shitou Xiqian." His current research includes a long term project on the history of the confluence of Buddhist monasteries and mental hospitals in Japan.

The Hardigg Family Fund was established by James S. Hardigg '44.